7. In Search of Love and Peace
I did these covers right after I saw the documentary "Exit through the Gift Shop". It is a fascinating (and maybe faux - though I can't tell) documentary on street art and the narrator is Banksy who is perhaps the most amazing;y talented and creative street artist out there. His stencils are so unique and evocative! The girl with the balloon is the only cd cover where the theme is copied directly from somewhere. I couldn't resist as this is my second favorite after the girl with the baloons on the West Bank wall. For this one I did want to get the background just right. I thought of replicating the texture there is on a wall and decided to make it pink and white to retain the innocence that I associate this with. 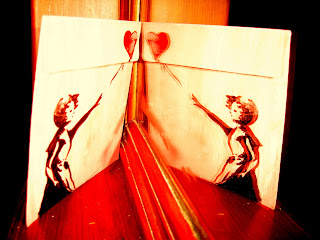 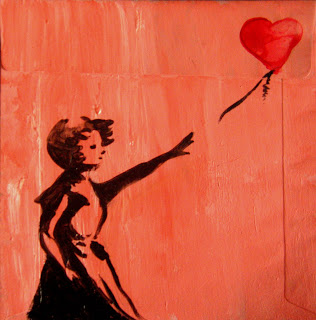 I decided to keep the second in the series very simple with single strokes depicting a dove with the heart-shaped balloon. You can't tell, but the main theme in this painting is really the background. I wanted to get a bright and shiny background to offset the pink and white dove and heart. This background actually took me an hour as I did several layers and created a 'hatched' texture with a very thin needle. This created depth without giving the rough edge that is there in the other paintings. 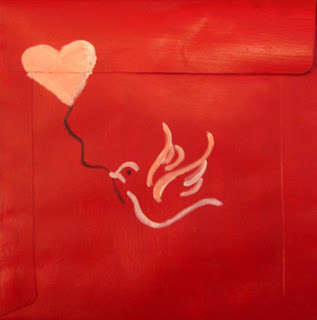 It was easy to pick the photo-themes for this CD cover. I thought the dove with the Buddha and the heart at the feet of Ganesh captured why I did this painting. 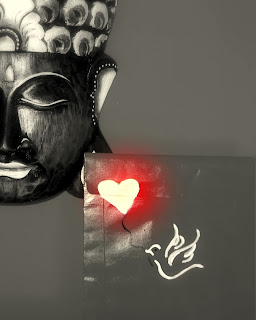 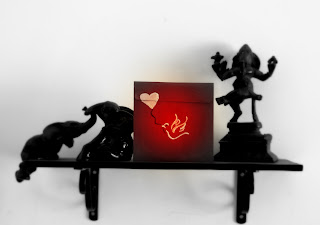 8. The Siren's Song
This CD cover happened almost immediately after I saw Neil Jordan's 'Ondine'. It is the story of a fisherman played by Colin Farrell who find a girl in his fishing net and starts to believe that she is a mermaid when his luck changes. It is a wistful and haunting movie and if this is how Jordan does fantasy then I wish he would do a lot more....
I wanted to make a painting that was story-book but at the same time sort of rough.
I decided to make a turbulent sea but like the Phoenix painting, I thought of communicating the turbulence through my strokes and decided on a yellow ochre base with lemon and white. I used 3 different size brushes to get the effect before the paint dried. The base came out so beautifully that I was afraid to paint too much over it :). I was thinking of Neeru and how she would like the story of the Little Mermaid and knew that the mermaid had to have red hair! There are no real details except the sort of wind-blowing and waves billowing at her feet. I wanted to avoid making the waves like typical strokes, so instead in a moment of inspiration, I decided to put the paint into my toothpaste cap and dab on the 'waves'. The effect was exactly as I wanted it! 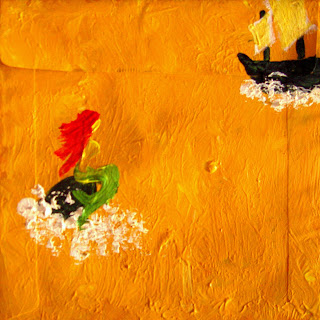 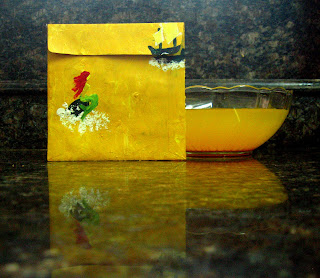 9. Eternal Sunshine of the Spotless Mind
I was reading Alexander Pope's poem again sometime last week - parts of it that I have written down, not all of it - it is a looooong poem!.... The poem reminded me of Clementine and Joel and I wanted to make a painting that captured Eloisa and ultimately Clementine's quest for forgetfulness ...
How happy is the blameless vestal's lot!
The world forgetting, by the world forgot.
Eternal sunshine of the spotless mind!
Each Pray'r accepted, and each wish resign'd ...
When I started this painting I knew I would make a literal 'head full of sunshine' theme but I also knew that it would be Clementine and not Joel. Maybe because her idiosyncrasies makes her the most honest character in the entire movie for me. The painting is flat but the deepest texture is in the head. I painted about 4 layers in the same colour but every time with a little more texture. I wanted it to represent the fact that deleting memories from the mind just whitewashes things keeping the deeper experiences and the changes in our soul intact. 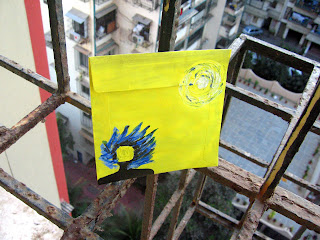 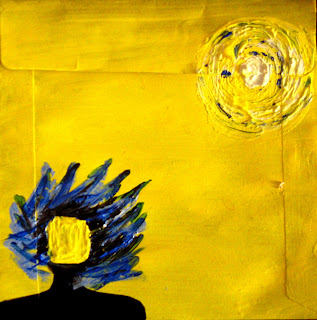 In conclusion, the complete set of 10+1 CD covers with the special last one made with the option to delete :).
Cheers! 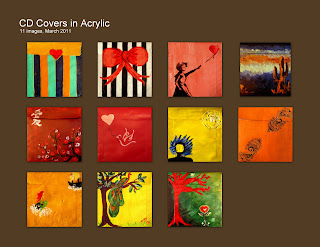 4. Cherry Blossom Theme:
I was thinking about Hugo and last year in Tokyo with him. We caught the last of the cherry blossoms together and it was one of my best holidays ever. I was feeling so bad about the destruction of one of my favourite cities, I wanted to paint my most beautiful memory of it. The character is not japanese though - it is the chinese character 'ai' which means love. Shout out Hugito-san and wishing health and peace to my friends in Japan. 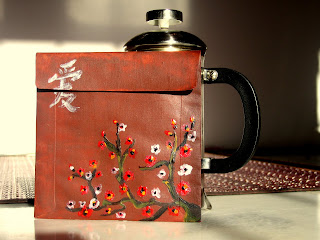 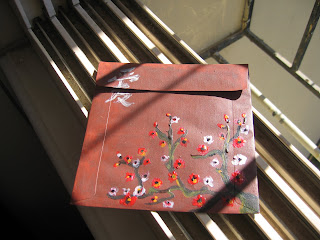 5. The Phoenix Sun:
I had just watched 'The Way back' with Ranjan uncle and Rita aunty in Pune and there is a scene where the escapees were crossing the Gobi. The shot was so beautiful and also what struck me was that without any shapes to distract the horizon the colours of the setting sun did actually set off like stripes in the sky. Made me also think about a road trip Rak and I took from California to Phoenix to spend the weekend with Teeky. 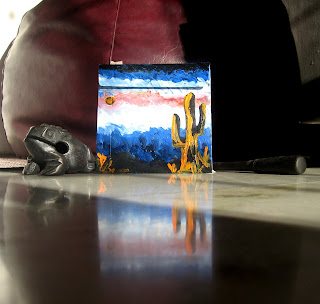 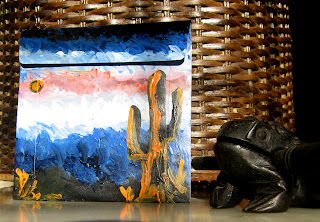 With this cover, I was becoming more 'bold' and I decided to incorporate very strong strokes to get a deep texture as well as to capture the chaos that ensues on the boundaries of the colours mixing in the sky. If you zoom in, you will see that it really is not a very 'fine' painting and yet I am very satisfied with the fury of the strokes and the overall 'calm' result of the scene.
6. Peacock Tales:
In order to take the concept of utilizing the flap better, I thought it would be interesting to incorporate a classic 'peacock on a tree' theme. The peacock was an obvious choice as I could utilize the space with the tail and balance the immense amount of yellow I decided to use with the deeper colours of the peacock and the tree. 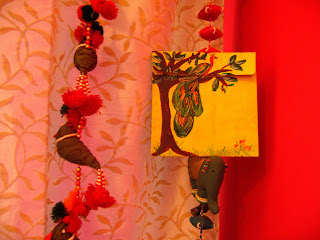 .
When I was looking for a photo theme, my vertical torans jumped out and I thought 'Bird on a wire' was an apt theme for this acrylic peacock.
Posted by Mona Raina at 2:53 PM 1 comment:

Project in Acrylic - Part I

A month ago, I undertook a project to paint CD covers as an outlet for the stresses of things happening/not happening with Mrigya. The project turned out to be so much fun and was so fruitful that I thought I would write about it.
I have no idea how the thought of doing this project came to me. I basically saw these cute covers at Rightway Stationery (an insane local stationery store that has everything - their tagline should be 'we also do stationery') in 4 Bungalows and a box of acrylic paint next to them. Before my mind had an opportunity to question why - I had already paid for a dozen of the covers and the paints and was on my way to paint for the first time in almost 10 years!
I had never used acrylic paint before and had no idea how fast it dries! It was a fantastic experience and the best de-stress tool in the world as when I was painting, I had to react so quickly that I had absolutely no time to think about anything else. Another nice thing about acrylic was that I had no opportunity to draw anything so I had to directly paint which also made the work very spontaneous.
Since I was pasting the covers with the flap-side up, I also thought it interesting to paint utilizing the flap and the dynamics of having to open it or 'open the painting' in order to remove the CD inside. As you will see below, I have a very tentative start and then towards the end I really started taking risks with confidence. I have since sent all the covers out to people I thought of when I was painting them, but I did take some pictures around the house so I could remember them.
1. Royal Theme 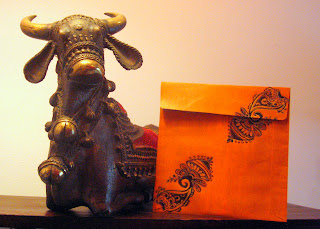 The first CD cover was for a copy of the movie 'Ever After' and I decided to do something - 'royal' but also fantasy-like - so I used a very rich orange for the background and an elaborate 'kairi' design tinged with gold. I also thought that a picture with my 'royal' bull was fitting as the design is also ethnic.
You can tell that the background is a little patchy as I was still trying to figure out the consistency of the paint and how it dries. Though not perfect, I liked it as I was able to do a design over the flap. This was simple but a little tricky to paint directly without an outline as it needed to be very symmetrical to look good.
2. Fantasy Forest: 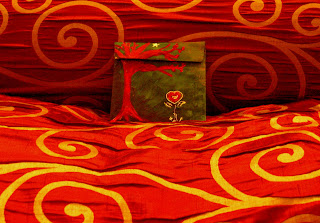 The second one is a fantasy forest theme. I was thinking about light filtering through a thick forest especially since I was reading Tad Williams' Shadowmarch where a shrouded mist keeps a fantastical and evil forest in shadow. ( Highly recommend the book for fantasy lovers as Tad outdoes himself in the depictions). It was challenging to mix colours seamlessly since they were drying so fast, so I decided to take a more 'rough' approach and it worked as I looked more to the texture of broad strokes rather than finesse. 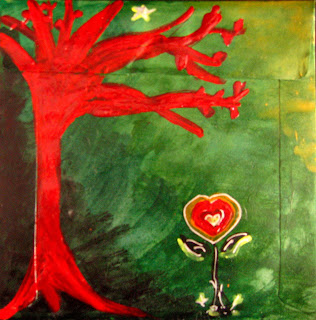 My fantasy forest has a fantasy red tree which looked so good. I then embellished the tree with bright read nail polish to get a really gnarly texture and used my pearly nail-polish to give that brightness for the flower and the single star at the edge. I don't think dark forests with magical trees are necessarily a bad thing - but the added silver certainly completes the magic.
3. The Wedding Theme:
I was thinking about Aimee's wedding (Big shout-out Aimee-jee!) and how wonderful it was to be a part of it. I was not there for long, but the last 3 days before her wedding were wonderful with all that last minute planning and picking up favours and themes. The next two covers are boxes with wedding presents. The first one was easy with the classic black and white box and the huge bow. The second one I wanted to be more retro, hence the bright stripes. Also if you haven't noticed already - I was feel insanely corny, so almost every cover I painted has a 'heart' somewhere. Since this was for friends I love, I thought it fitting (and terribly corny, soap-oepra-y as well) 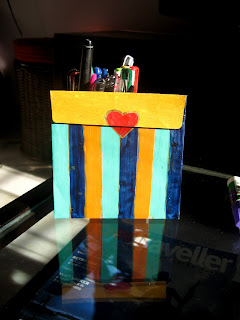 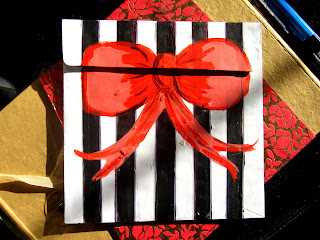 <-- Retro (I was thinking french!) Wedding box
<--Classic B&W Wedding Box
More in the next post!
Posted by Mona Raina at 11:33 PM No comments: