We have not launched our website properly yet - but the spybots have already found us! :)
mrigyaventures got its first spam message from a bot last night. I guess we have finally arrived!
world-wide-web domination here we come .... 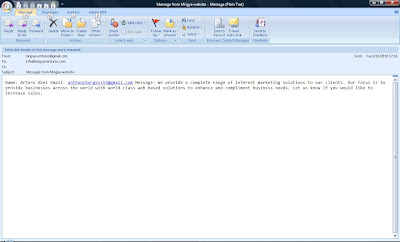 Name: Arturo Abel
Email: anthonyburgess55@gmail.com
Message: We provide a complete range of internet marketing solutions to our clients. Our focus is to provide businesses across the world with world class web based solutions to enhance and compliment business needs. Let us know if you would like to increase sales.
It is sad and a little endearing that all three of us were a little excited about it ... :)
Speaking of robots - here is a really cute quote I found:
Posted by Mona Raina at 8:58 AM 2 comments:

One week prior to Comic-Con - Entertainment Weekly - a magazine that completely revamped themselves by moving from the small 'TV-schedule' magazine format to the larger spread did the exclusive reveal of Ryan Reynolds in his Green Lantern Costumer -- va! va! voooom! :) 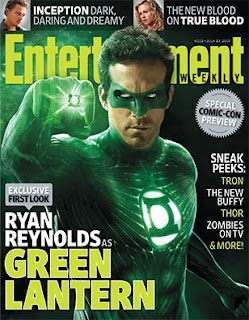 The teaser First look released during Comic Con:
http://www.dccomics.com/sites/events/videobox.php?f=/media/_dcu/audio_video/Green_Lantern-480x270.mov&width=521&w=496&height=316&h=286
(an aside -- WHAT is that dress?! it moves - it breathes - its Lively -- ahem! I'm transfixed and I am sure the geeks went home happy -- carrying that chest-panel-less dress off without a wardrobe malfunction is simply fantastic -- kudos Blake!)
It took Warner a while to green-light (ahem!) the Green Lantern project despite fans trying all sorts of ways in which to drop broad hints at wanting to see a movie. One of the more famous - a fan-made trailer with Nathan Fillon in the title role. This trailer is so well made that it had a few people fooled and became a big internet hit with even Nathan endorsing the trailer - lol!
http://splashpage.mtv.com/2009/05/26/fan-made-green-lantern-trailer-receives-nathan-fillions-endorsement/
Posted by Mona Raina at 12:58 PM No comments:

I would like to start on the poster blogs with the absolutely brilliant campaign for the forthcoming movie - 'Green Lantern'.

The budget of the movie is a very healthy $150 Million, which means that DC Comics and Warner Bros are hoping to have another superhero money-spinner on their hands. Green lantern is a relatively unknown superhero. Besides crazy fans like yours truly - most people are not aware of the intergalactic police force monitoring the universe. Compare this budget with the 2006 film Superman Returns' budget of $200 million and you see that Warner is expecting to make quite a lot of money (and sequels) from a Green Lantern franchise. In order to maintain a long-term franchise it is very important to get 'family approval'. From past Batman debacles, movie studios know that the fans MUST be sated. These are the guys who will line up at midnight and will stay with a franchise when all others leave.

Keeping that in mind, Warner Bros picked the best possible time to release the marketing campaign - Comic Con in San Diego. This was an audience of hard-core fans who are - most importantly internet-savvy and very internet-verbose. Within hours of the first look posters being released, the blog trails lit up and the word-of-mouth on the posters started. Ryan actually did not say the Green Lantern oath out aloud until he was arm-twisted into it by the cute-kid brigade:

In fact, the WOM on him taking the oath was so good - I tried searching on google using the term " ryan reynolds + green lantern + oath" and got 5 million results! That is just fantastic, considering that the movie is out NEXT Summer! that is a year away! Imagine the buzz around this movie by the time it releases.

On to the posters then - they are just FANTASTIC! These are the perfect 'teaser' posters for this film. It has enough insider stuff to keep the fans happy and feeling superior.

The colours are the typical lantern green with darker tones - very mysterious, adult and signifying a darker storyline. The usage of Hal Jordan's oath "... in brightest day, in blackest night. No evil shall escape my sight ... " - se super!

Ryan Reynolds introduction as Hal Jordan / Green Lantern:
(Sorry - can't help myself ---- "Whoop!" I mean I thought Ryan had potential in Blade Trinity and then definitely as Deadpool in X-men: Origins, but honestly I was not a believer of his Hal Jordan - but I am SO converted ...) 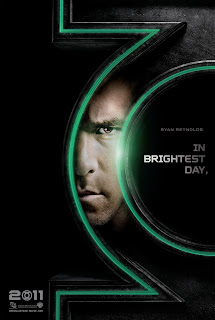 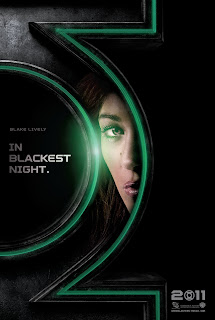 Mark Strong as Sinestro and Peter Sarsgaard as Hector Hammond
(Though poor Mark has become type-cast s the villain now, it is good to see someone recognize Peter's potential for super-villainy) 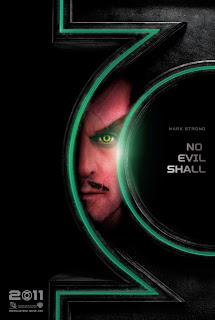 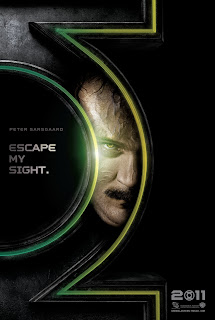 These are the posters joining to form the rings -- one with good and the other evil --- very - very - very nice design! 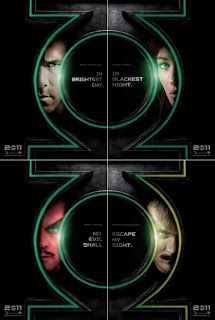 I don't know about you -- but this teaser has me super-excited about the movie already. I think it will be fun to see how the DC guys keep the marketing going for the next year.
Posted by Mona Raina at 1:24 PM No comments:

It has been a while -- a year almost that I have blogged about anything.
I have wanted to -- many, many times but I find that an entrepreneur lives in fear of everyone so the whole 'writing about my company' is never going to happen. Besides really boring procedural blogs, all the gossip and the interesting encounters will have to remain as coffee-table conversations.

The one thing I figure I can blog about is my passion for posters and credits. Actually this was suggested by Nikhil and Ashutosh and I think it is a brilliant idea.

I love - LOVE - to analyse movie marketing campaigns. I think the ones in India are SORELY lacking. It is such a pity to see so much potential wasted because the producers did not understand the last mile. This statement of course does not include the smart marketing campaigns conducted by the Farhan Akhtar, Karan Johar and Amir Khan camps. But, even their marketing campaigns are targeted only at the audience in the cities.

Marketing movies to India is like marketing to many different countries. There are so many types of audiences that in creating a generic, vanilla campaigns, the producers lose out on majority of the potential of the movie. I am going to blog about the movie marketing campaigns that I really like and why and I hope that you will comment/respond and let me know whether you agree.

Tchuss!
Posted by Mona Raina at 1:09 PM No comments: